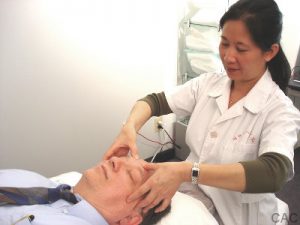 Using Taoist principles Traditional Chinese Medicine developed the hands-on treatment called Tuina or “Tui Na”. Tuina has been used in China since ancient times and some would describe it as a specialized massage.

Dr. Gao uses Tuina to create a balanced TCM treatment. She stimulates acupressure points by using a variety of actions including pushing, pulling (traction) and flexing of joints. Tuina is precisely crafted by Dr. Gao to match other treatments including acupuncture, fire cupping and moxibustion. Tuina is classified as an “external” treatment in TCM as it does not involve penetration by needles or ingestion of medicine.

You can read more about Tui Na on wikipedia here.

The primary tools of TCM are acupuncture and herbal medicinal teas.